In the past newsletters, we’ve brought you many stories of the amazing happenings that take place in China and this letter is not going to be any different. 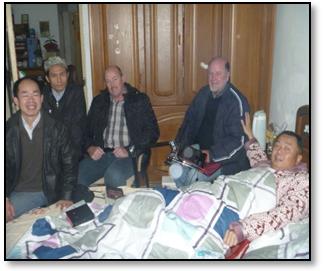 John, Humber, Ken and Brett with Brother Y in bed with a broken back

Brother Y is a man we’ve often talked about from previous newsletters. Well, 4 months ago, he travelled to Yunan Province to distribute rice to a minority-group living in the mountains. These people are extremely poor and their houses in dis-repair, because most of the men have left the area to find work. However, when the men find work, nothing of their wages is returned to the wives and families. Hence the families are starving. While Bother Y was visiting one of these houses, the top step collapsed, throwing Brother Y towards the stone floor. When he landed he broke his back. However the amazing thing is he didn’t lose his life. Brother Y was holding his Precious Book when he fell. His Precious Book landed on the stone-floor and, within a split-second, his head hit the Precious Book – saving his life. Brother Y has an amazing work throughout China, sharing and teaching, and he also oversees one of our orphanages. This true “man of belief” has a fantastic story and is a real inspiration to many in China. 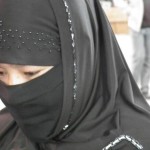 Typical dress worn by Urgur woman, which can also be very colourful

During our recent 2 month visit to China, we were led to think about starting a work in the “west” of China. So, much of the time in China was spent travelling. Ken McKay came with me on this visit and he was able to get a real insight into our work in China, especially on one of our trips to the west of China. Because we only had limited time, I needed to plan the trip carefully. Places we visited were: Urumqi, Kashgar, Taxkorgan and Hotan. It probably doesn’t sound much travel, but if you were to find these places on a map, then you would understand the great distances across deserts and mountains between these places. To visit a brother in Taxkorgan, we were at 14,500ft, with a lack of oxygen quite noticeable. 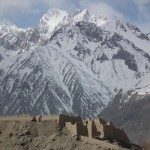 Fort at Taxkorgan – on the border with Pakistan and Afghanistan

Taxkorgan has one of China’s ethnic people groups, “the Tarjik’s” with another 55 tribal groups in China. To get to this place is not easy because this is a very politically sensitive area. However, with visas and determination, it can be done. I had no idea what to expect, but the scenery is spectacular and this is real camel and yak country. When I learned how harsh the minus 50 degree winters are, I had a greater respect of how tough life is here. Many of the peaks around Taxkorgan are over 26,000ft, so the harvest season is very short for these people. We now have a net-work of family in this area that we can work along-side with.

I was privileged some time ago to have received a series of photos taken by European missionaries who came to Taxkorgan and Kashgar in 1933. However, they travelled by foot, horse and camel over the same route we took to Taxkorgan, but they were coming from Pakistan through the mountains. They even brought children with them over the high mountain passes. Some of these passes would be about 18,000 to 20,000ft, so the commitment of these early missionaries is astounding when you consider the hardships they must have endured. 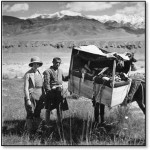 Taxkorgan and Kashgar from Pakistan in 1933. (Baby daughter Marianne, sucking her thumb – in side-saddle box)

I’ve had these photos for some time now, but I’m amazed that we were led to the same places they travelled. It wasn’t until I returned to NZ, that I discovered I had taken the same route and, to be honest, I had no idea that Andrew, one of our workers, was going to take us there in the first place. All I knew was that we were going to visit a “friend” in Taxkorgan. 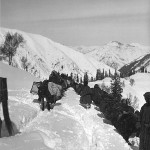 Please continue to think of us in our work,
Blessings,
Brett

This entry was posted in News. Bookmark the permalink.