An enjoyable and profitable evening was held on Friday 23 September 2011 at “The Barn” located at Pukehou just 15 minutes south of Levin.

The purpose of the evening was to raise the profile of Share Global, give some feedback on Brett’s latest trip to China and to allow folk to contribute to the ongoing work in the orphanages. 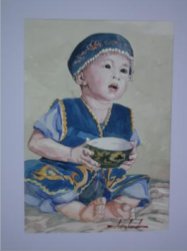 Following the opportunity to stroll through the pleasant surroundings of the gardens at Pukehou, guests were treated to some coffee and desert before being entertained by “Jeronocol” comprising Jeremy and Rona Cooper and Colin Brown, a local group with obvious talent. There is a link to their website to view video of some of their songs. jeremy cooper songster.co.nz

David Trail and Adele McCartney then offered their renditions of some popular songs which appealed to the audience of 80 or so people.

There was a report given by Brett and Alistair McKenzie on their experiences in China which proved, once again, that one has to always be prepared to expect the unexpected when visiting that vast and fascinating country.

Alan Smith, a local identity, then conducted an auction, the main part being a series of water-colour portraits of Chinese children. Brett had photographed these children and local artist, Audrey Garratt, based her superb works of art on these photos. Some other artefacts and items from China were also offered. Alan was able to draw bids very successfully from the audience which resulted in $4000 being raised in what turned out to be a very successful evening.

Thanks goes to Brett for the organising, the entertainers, Alan as auctioneer, Mal and Val Dodge for the catering and providing the venue, and to all who showed their support for Share Global.

This entry was posted in Event, News. Bookmark the permalink.